On Sunday our new participative TV-thriller "The Spiral" premieres on SVT and seven other European channels. We have been involved in developing the concept and story from day one, with extra focus on hardcore interaction and live-action events. Over 200 hours of live footage from our first game is to our knowledge the biggest body of documentation of a single serious live-action roleplaying event. In the game the actors from the TV-thriller play alongside nordic LARP enthusiasts. We are proud to make all that material public to anyone, researchers, editors looking to explore emergent drama and players alike. Find it all right here: http://media.arturoswarehouse.com/ 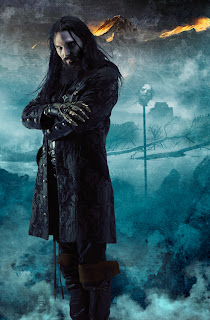 Posted by Elricsson at 16:23 No comments:

So 2012 rolls around at last. Bardo's work has been mostly invisible to the public eye during 2011, but this is about to change in a pretty big way for the latter parts of 2012. Without revealing too much I'd love to give you a brief rundown of some cool stuff we've been up to but not been able to tell you everything about. Yet.

The Artists. In October we built and populated a living story-universe for six major european broadcasters. The Artists looks to be matching "The Truth About Marika" in ambition and scale. 40 people, including some well-known EU actors took part in a Living Drama inspired by Nordic LARP traditions, but written and directed to approach social realism rather than over-the top drama. It also gave us a reason to collaborate with the awesome crew at Odyssé, the Bardo of Denmark, sort of. We are currently sifting through hundreds of hours of documentary film material from this parallell reality. Bear with us, in just a few months the first reports from this undiscovered country of participation will start to drip into the interwebs. It's all about what people are prepared to do for art and love, and how beautiful dreams can turn into nightmares, and back into dreams again.
Vampire: The Masquerade: 20th Anniversary edition. Our lifelong love-affair with CCP/White Wolf was finally consummated when I got to model for a full-color illustration by legendary comic book cover illustrator Tim Bradstreet. The book in question is a celebration of 20 years of counter-cultural roleplaying. Without The Masquerade there would be no True Blood, Vampire Diaries, Underworld or (pain) Twillight. I promise to dedicate a post in the future to the cultural importance of VTM, but for now just trust me that it's the granddaddy of all the hot bloodsuckers you love. Anyways, I'm now immortalized as the face of Eastern European Vampire-clan Tzimiche, specifically as the greatest immortal playboy in undead history; Vlad Tepes. Yes, Bela Lugosi is indeed dead! We also had the massive pleasure of portraying The Count and his entourage at the Live-Action Roleplaying events at The Grand Masquerade, where the tome was released. Massive shoutouts to the international Camarilla all the crazy crews we hung out with. And to Shane DeFreest for making it all happen! This year it's time for Werewolf: The Apocalypse to get the anniversary treatment. Will we be there? You betcha!
Talks galore! There was a fair bit of touring as me and Adriana visited about 20 conferences, festivals, private educations and universities giving talks about the power of participation, giving advice on working with branded entertainment, building transmedia teams and generally destabilizing consensual reality in fun and profitable ways. We discovered we absolutely love this aspect of our work, so don't be shy and drop us a line if you want to feature passionate interaction-artists or transmedial thinkers at your event or education.
Guided by Ghosts. Radical ghost-stories was the subject of our very first pervasive games. In 2012 we are set to return to the land of the dead with a transmedia franchise for older children and families with a taste for brain-bending chills and thrills.
Monitorship Celestra. In early 2013, Bardo and a host of affiliated organizers take to the stars with a fully technologically supported Living Drama set on a retro-futuristic spaceship. Yes, the spiritual sucessor to Carolus Rex is finally becoming a reality!
Dreampark. There are no regular and commercially driven Living Drama / LARP games for children in Sweden. This will change pretty soon as Bardo writes the fiction for a bold new way to get kids into a form of fantasy gaming that will push their social skills, physical activity and love of stories in a way no computer will ever do.
Tempus Fugit and I prolly forget or keep a load of good stuff under wraps. Anyways, here's to 2012, the last year of the Tzolkin calendar and, hopefully, the year we realize our fate is to play the world into a joyous state of solidarity, hedonism and equality.
Ewige Blumenkraft!
/Martin Elricsson
Posted by Elricsson at 16:20 1 comment:

Please allow me to introduce myself...

What is this Bardo thingie then?
Bardo is Martin Ericsson (a.k.a. Elricsson) and Adriana Skarped (a.k.a Daggenfelt), the creative couple behind International Emmy Award winning participation drama "The Truth About Marika" (produced by SVT) and the original "Prosopopeia" mythos as made manifest in the tech-enhanced possession-games "Bardo 1: Where we fell" and "Bardo 2: Momentum."  (Produced by SICS, P and TII)

Martin has worked as a creative director and designer with Christopher Sandberg's The Company P for almost five years, writing, designing and running game-like projects involving companies like Nokia and creators like Tim Kring (Heroes) and Joss Whedon (Buffy, Firefly, Dollhouse). Please read more on the greatness that is P, you will be amazed!

So why a new company?
The scale that P is operating on is the main reason for founding Bardo at this time. We wanted to go back to smallish and intimate - focusing squarely on designing and running powerful participatory experiences without involving ourselves too deeply in the nitty-gritty of TV-production or managing a huge workforce. We also wanted to try out some radical forms of organization that wouldn't quite fit within the structure of another company.

So what now?
Bardo is currently gearing up for a secret project codenamed A.S.K. It involves exposing the forbidden secrets of Nordic Live Action Roleplaying, hundreds of cans of spraypaint, artistic pretense, a SWAT-team, some major broadcasters, the interwebs and you.

So, what's your take on this? Does the world need yet another "transmedia" company? What would you like us to do next?

Posted by Elricsson at 13:39 No comments:

Bardo is a Tibetan word for the time between death and reincarnation, often interpreted as "liminal" - a threshold between one state of being and another.

That's what this place is, a temporary home for Bardo AB. We are award-winning story-makers in broadcast participation drama, our toolbox includes online gaming, social networks, tabletop and live action roleplaying. We want to make the world less real, more fun and we want you to love every minute of it.

We may find the need for more a more "proper" page one of these days, but in this age of free tools, can we really be bothered? You tell us! Should we get a proper website? And what is a proper website?

What should Bardo do next?